Translation and scans by Kstew France please credit us. 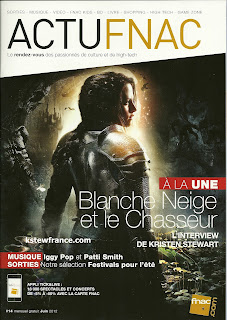 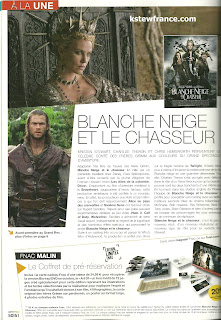 Snow White and the Huntsman

An adaptation very free of the Grimm Brothers’ work, Snow White and the Huntsman was initiated by a screen writer from Disney, Evan Spiliotopoulos, before to be revised by the Iranian Hossein Amini (The Wings of the Bove, Drive). Borrowing from the medieval adventure movie to Braveheart, and heroic fantasy, this ambitious production was given to a newcomer. Indeed, producers Joe Roth and Sam Mercer to whom we owe each Alice in Wonderland and Sixth Sense picked Rupert Sanders. Renowned for his advertisements often experimental dedicated to video games (Halo 3, Call of Duty, Wolverine), Sanders demonstrated an assured visual sense given the logistics and special effects which are in the Snow White and the Huntsman project.

After a very popular cast , the production stopped her choice on the frail heroine of Twilight, Kristen Stewart, most likely to embody the metamorphose of the sweet Snow White in a determined warrior. Face to her, Charlize Theron dove with delight in the part of a fierce Queen for who the beauty and the power are two-edged of a same sword.

Filming in the British studios of Pinewood, the crew of Snow White and the Huntsman took the opportunity to complete its cast with a parade of the best supporting actors of the British cinema (Ian McShane, Bob Hoskins, Ray Winstone, Nick Frost, Toby Jones, Brian Gleeson and much more) able to become the most extravagant in the least amount of replicas.

Snow White and the Huntsman, is the challenge of a new story, of a new director and a new kind of part for Kristen Stewart. 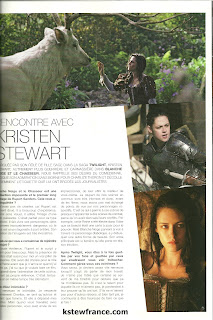 Marked by her part of a sweet girl in the Twilight franchise, Kristen Stewart, more warrior and carnassials in Snow White and the Huntsman, remember us her desires as an actress, evokes her admiration without limits for Charlize Theron and pull off the label that the journalist have put on her.

Snow White and the Huntsman is an imposing production and the first movie for Rupert Sanders. Did you worry about that?
I didn’t have any fears because Rupert is really talented. He has many experiences, a real visual sense; he uses the picture in a powerful way. He makes live his characters in a very dangerous universe where the setting is a protagonist on its own. His use of imagery is evocative.

What convinced you to be a part of the project?
Evidently, Rupert and the script were the main reasons. But the presence of Charlize was also for me a true pillar of the project. She was chosen for the part of the Queen before I came and when I learnt that, I knew I wanted to do this movie.  I grew up in the admiration of this actress. She is her own reference. It was fantastic and at the same time very intimating.

You were intimated?
Yes, nervous and intimated. I respect enormously Charlize, as an actress and as a woman. And she exceeded what I was expecting. But when you work with such persons, you want to impress them, to give them the best of yourself. Mostly of our scenes are very intense so, before to film them we exchanged our points of view on our own characters. This is what allowed these scenes to be almost like fight scenes, because we gripped well their conflicts. For example, this Queen was raised in the idea that her beauty was important for her power. But Snow White achieves to see through this diabolic character, to discover another form of beauty. Her principal weapon is the light that she carries in herself, her intuition.

After Twilight, you are watching by your fans and by those who want to see you fall. How do you handle this extreme?
You know, I become quickly nervous in the case I have to talk about my job. I don’t like the idea that some people use my shyness to deduce that something don’t interest me. If this is why they don’t like me, I can prove them they are wrong. If they don’t like me for any other reasons, never mind, I will continue to be happy to do what I do. 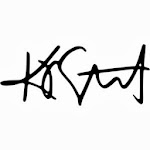 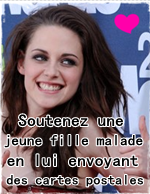